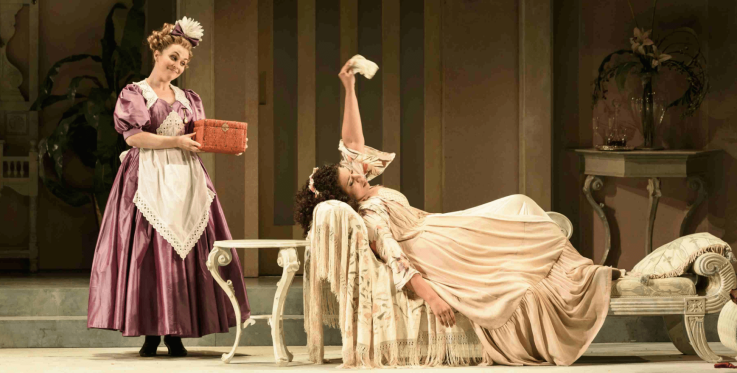 As the saying – and singing, in this opera – goes, ‘chacun à son gout!’: ‘to each his own taste’, and the taste of Welsh National Opera’s Die Fledermaus is champagne – bubbly, celebratory, flamboyant, but with a little bit of bitterness in the aftertaste.

Die Fledermaus is an operetta caught somewhere between Restoration and Shakespearean comedy: a well-moneyed misdemeanant – a markedly strong Mark Stone – seems more interested in other women than his own wife, everyone from the mischievous chambermaid to her suspicious mistress set about scheming their way into a masquerade ball, an elaborate if improbable plot featuring false identities, lots of flirting and a few faux-Frenchmen, and, of course, a finale where all is forgiven and the ruse is revealed. This is operetta with frills-and-all, and with all the fun and frolics, it’s more than just the misbehaving husband who’s getting merrily mocked, it’s the opulence and improbability of opera, too.

Act I is a triumph, particularly in its faux pas-fest of a finale that’s gloriously funny and gorgeously performed by Judith Howarth’s wronged-but-wily Rosalinde, her ardent ex-lover Alfred – a fantastically theatrical Paul Charles Clarke – and James’ Cleverton’s Colonel Frank, a partying prison governor after a good time. Act II follows with the frou-frou of silk skirts and three-piece suits from Deirdre Clancy’s fabulous costumes, the rich and wonderful sound of the Welsh National Opera in the chorus numbers, and Anna Harvey’s brilliant performance as the bored Prince in a wholly-believable breeches role. Yet, in Act III, Steve Speirs, though as droll and charming as a drunk gaoler can be in his non-singing operatic debut, somewhat stops proceedings to perform some out-of-place stand-up. Die Fledermaus doesn’t need any non-diegetic assistance to find its laughs: the drunken governor’s ungainly entrance in Act III is expertly played, Rhian Lois’ coquettish chambermaid-come-actress Adele is a soubrette of a soprano with sublime comic-timing, and Ben McAteer’s troublemaker is as voracious and vivacious as a bon viveur should be.

Strauss’ music is sumptuous, with the rich, waltzing overture setting the scene for the riches, waltzing, and romps to come. James Southall conducts Welsh National Opera’s joyous and spirited orchestra with verve and joie de vivre, and it’s the music makers – on stage and off – that provide the real taste of the evening.