Over a century ago, the Wicked Witch of the West first flew into Oz in L. Frank Baum’s The Wonderful Wizard of Oz; green and ghastly, she was after silver slippers and had only one all-seeing eye. In 1939, she was immortalised, in a certain shade of green and on screen, by Margaret Hamilton in MGM’s musical The Wizard of Oz, this time on the hunt for ruby red slippers to make the most of Technicolor technology.

After frightening families for over fifty years, Gregory Maguire reimagined the green-skinned miscreant as a green-skinned, misunderstood young woman with, for the first time, a name: Elphaba, fashioned from L. Frank Baum’s own initials, in the novel Wicked: The Life and Times of the Wicked Witch of the West. This previously untold story of the Wicked Witch’s life and times prior to Dorothy’s appearance was adapted into a stage musical: Wicked. With music and lyrics by Stephen Schwartz and book by Winnie Holzman, the musical opened on Broadway in 2003, starring Idina Menzel as Elphaba, and was nominated for 10 Tony Awards, winning three.

Now, on a September day in 2017, it’s over 10 years since Wicked opened at the Apollo Victoria Theatre in London’s West End and it’s the announcement of a new Wicked UK Tour, to begin in Bristol in the New Year, and a new Elphaba. As Executive Producer Michael McCabe explains in his introduction, some of the company are experienced cast members and have already performed in the show in different capacities, and others are ‘absolutely brand new’, bringing ‘excitement’, a ‘new interpretation’ and ‘new emotion’.

Going green for the first time is Amy Ross as Elphaba, with recent roles in Sunny Afternoon, Kinky Boots and Heathers: The Musical, and going ‘Good’ again as Glinda is Helen Woolf, after covering the role in the West End and as part of the first UK Tour in 2013. Their performance of ‘For Good’, the witches’ heartfelt farewell to each other near the show’s finale, even in a conference room with microphones and without costumes, is bewitchingly beautiful and could melt the most wicked of witches.

Then, fresh from the East End and welcomed to the west is Aaron Sidwell as Fiyero, the love-interest who’s just ‘Dancing Through Life’ before he falls for Elphaba. As well as Eastenders, Sidwell has also had leading roles in American Idiot and Loserville the Musical. He and Ross perform ‘As Long As You’re Mine’, the dark and brooding duet between Fiyero and Elphaba, with all the tenderness the love song demands, but also with the burning determination the lovers have to be together in the musical. 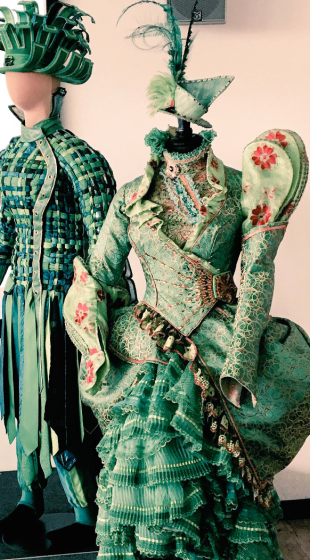 As well as the cast, Susan Hilferty’s award-winning costumes were on display. As detailed as they are decorative, impressive, opulent and in every shade from emerald to olive, they’re sure to shine onstage, like the new UK Tour cast who will wear them, in the ultimate musical about friendship, fighting the good fight, and defying the odds, as well as gravity, as Elphaba did today over Bristol’s dockside.

Writing & library-ing, with a love of ballet, arts & literature, & all the alliteration