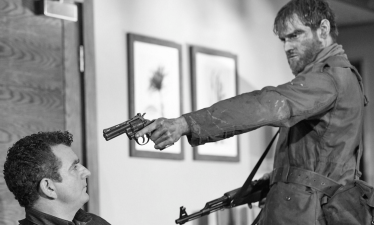 Two plays, Dennis Potter’s Brimstone and Treacle and Sarah Kane’s Blasted, although written almost two decades apart and dramaturgically different – the former a mid-seventies commission for television broadcast, BBC’s Play for Today, the latter selected for the Royal Court Theatre Upstairs’ 1994/5 season, where as ‘few as 1,100 people in total’[1] saw the original production – both pose a challenge to the cultural norms of their time. The challenge they pose is immediately evident when one considers their initial reception: Potter’s play was banned from transmission by Director of Programmes Alasdair Milne and not broadcast until 1987, with Milne fearing that ‘real outrage would be widely felt’[2] in the absence of communicating ‘a point of serious importance’[3] that would justify the controversy, and Blasted was branded a ‘disgusting feast of filth’[4] – the infamous headline of critic Jack Tinker’s Daily Mail review – and not revived at the Royal Court Theatre until 2001. This study will analyse how these different but equally divisive plays challenge the cultural zeitgeist through two features they share, the loose formal structure of a visitation drama and the depiction of rape, and finally explore just why they’re so challenging. END_OF_DOCUMENT_TOKEN_TO_BE_REPLACED