The Three Faces of Fear face-to-face with a live three-piece: part performance art, part foley artistry, part improvisation, Bava’s classic terror-trilogy Black Sabbath finds the perfect ambient accompaniment in Dead Space Chamber Music. In an intimate cinematic setting, the music is close and the atmosphere closer, as the closing act of the film is scored by their echoing, neoclassical intensity.

Following the tense, domestic drama The Telephone and the weird and wonderful tale of The Wurdulak, The Drop of Water is the most traditionally terrifying of the trio. The film, lit with gorgeous, incandescent pastels, follows a young woman as she’s plagued by fatal guilt after pocketing a ring from a corpse. Yet, it’s not with the corpse’s fingers that the terror grips tight, but with creeping acoustics: with little dialogue, a droning fly, and the dripping water, a lot of the terror is in the transcendental sound, and it’s something that attracted the trio to the film, says voice artist Ellen Southern.

‘It’s a sonic film, so we took the soundtrack and chose which sounds to keep, fading sound in and out from the original and playing alongside,’ as well as ‘performing the speech not as just a voiceover, but as an eerie sung suggestion of the spoken content, so it sounds more like an incantation, or that the speech is dismbodied, drifting and haunting the proceedings.’ With speech sampled, echoed, and sung-over, the effect is atmospheric, melancholic, and far from simply evoking the scenes in the film, the music, part composition, part improvisation, is existing, elemental and experimental. END_OF_DOCUMENT_TOKEN_TO_BE_REPLACED 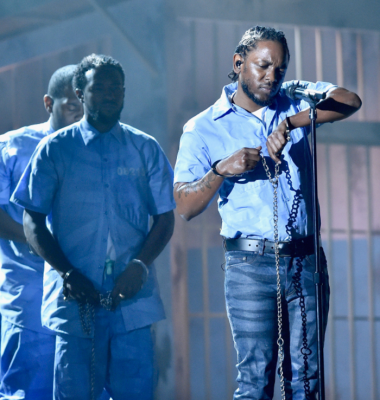 In time for this year’s Grammys on February 12th, here’s a throwback to last year’s, paying homage to history and politics and hip-hop in the most poignant way.

You’d be forgiven for thinking that a black millennial rapper and a musical about America’s white founding fathers would have very few things in common. Kendrick Lamar, born in Compton, California in 1987, and Alexander Hamilton, subject of the musical Hamilton, born in the Caribbean circa 1757, may be centuries apart, but both became a core part of the 58th Grammy Awards, for their wins and winning performances. Lamar won five Grammys, including the coveted ‘Best Rap Album’ for 2015’s Platinum-selling To Pimp a Butterfly. Hamilton, based on Ron Chernow’s biography Alexander Hamilton, with music and lyrics by Lin-Manuel Miranda and a cast-of-colour playing America’s predominantly Caucasian political cabinet of the late 18th century, won Best Musical Theatre Album. Yet, there’s something else these figures have in common: both are singing songs of social and political importance.

First up, clear spots shed light and cast shadows on a shuffling chain gang, Lamar their leader, as they slouch and lumber towards a microphone. The shackles and handcuffs clatter and shake, underscoring the sound of smooth sax – the sort of incidental sophistication one might expect to hear while sipping champagne in a smoking lounge – as Lamar raises his manacled hands and takes a moment to arrange them either side of the microphone; a seemingly simple gesture that garners poignancy in the struggle to perform it. His breaths are caught by the microphone, amplified, an aide-mémoire to the life in these convicts no matter now hard the media may try to muzzle them, before the bam-bam of a drumbeat. Here’s the crowning, hear Kendrick’s cry: ‘I’m the biggest hypocrite of 2015’.

The jazz interjects, and the lights reveal Lamar’s band behind bars. They too appear part of this chain gang, but these chains don’t need to be corporeal, and perhaps nor does the crime. The double drumbeats continue, and dictate Kendrick’s bars, the dancers, the light beams, and Lamar’s lurch with every line – half flinching in hesitation, half fighting to be heard – as he delivers the opening of ‘The Blacker the Berry’.

Lamar ‘proceed[s] to give [us] what [we] need’ as the prisoners emancipate themselves. The chains come off, then, with the lights down, there’s a beat breakdown and the gang get down, their convict uniforms glowing defiantly in the dark. The drumbeat goes on, but Lamar staggers, dazed, in the darkness, towards a blazing tribal bonfire. This is the spectacle.

Silence. For a second, his voice stands alone, and he speaks to us all: ‘wake up’. Lamar hunches low as he serves up the first verse of ‘Alright’, even stooping to our level to deliver ‘let me tell you ‘bout my life’, a powerful way to confront an audience of white-privilege. When the music comes back in it is soulful and full-bodied, with its African influence not limited to the sound, as drummers and dancers surround Lamar, mixing with the convicts to form a mighty ensemble, and in the midst of the revelry of a united race, you believe them when they say they ‘gon’ be alright!’

But before long, Lamar staggers back to where it’s blacked-out, and the sax feels as though it’s fading out, when he plays his final card – centre stage, spot-lit with eyes shut – an untitled verse that reveals what’s at stake. ‘On February 26th I lost my life too,’ he raps, a reference to the fatal shooting of black teenager Trayvon Martin in 2012 by a member of the community watch, later acquitted of second-degree murder and manslaughter, and it’s here that there is a stark realisation of the racial politics at play.

The finale, a camera close-up as the rapping speeds up and the shot is cut up, is what Lamar has lead us to, a ‘conversation for the nation, [that] is bigger than us’, that he then silences with the outline of Africa with ‘COMPTON’ stamped across it, as Lamar, a black silhouette, stands alone.

So, from this performance that paints a picture of all that has gone wrong in those supposedly united States, what follows is a performance from Hamilton, a musical about the building of that very nation.

Hamilton, with the opening number broadcast live from the Richard Rodgers Theatre on Broadway, tells the history of the United States through rap, hip-hop and R&B. This too opens with a drumbeat, although this one is more military than it is tribal, and accompanied by the sweet screech of violin strings and sporadic clicks from the company, wearing cream deconstructions of colonial dress. The camera pulls out and pans across to capture the actors as they enter and recount Hamilton’s early life in a ‘forgotten spot in the Caribbean’.

The cast may be dressed in the frilly collars and frock coats of the story’s setting, but their characters are colourful, not only literally, as people-of-colour are cast as America’s Caucasian founders, but also as from the mouths of these historic heroes springs the music of today: raps spoken over dark hanging chords with all the swagger of Kendrick.

The man himself, played by Lin-Manuel Miranda, has his moment in the spotlight, centre stage, too, and the company list his hardships. His father ‘splits’, ‘his mother went quick’, the last word a lingering whisper, haunting the scene as a woman is lifted, lifeless, to represent her passing, and, without skipping a beat, a man on a chair mimes winding a rope around his neck – Hamilton’s cousin committing suicide.

A phoenix rising from the ashes, like Lamar’s rebirth around his bonfire, Hamilton writes ‘his first refrain [as] a testament to his pain’, a creative process that recalls the origins of rap, where artists seek to write their way out of their circumstances. Off to New York to be a new man, Hamilton ascends to the set’s balcony, a bare, wooden structure controlled by the company, as the central narrator, identity yet unknown, resumes a quick spit of rapped rhymes.

The company line downstage, another collective-of-colour like Kendrick’s convicts, and are illustrative of, as Miranda has had to explain exhaustively in media interviews, a story of America then told by America now. And America now is where we are, as Hamilton descends the lowered steps as if coming ashore as the company sings, ‘the world will never be the same’.

The composition shares more than just style with hip-hop. Lines like ‘another immigrant coming up from the bottom’ echo the braggadocio not only of ‘The Blacker the Berry’s’ ‘came from the bottom of mankind’, but also of other artists, like Jay Z’s justified boasts in ‘Otis’ that his and fellow rappers’ achievements as African Americans are ‘not bad, huh, for some immigrants’.

As with Lamar’s performance, the finale gathers speed and sound, as spots individually illuminate the cast of supporting characters, a company who ‘fought for him’, ‘died for him’, ‘trusted him’, ‘loved him’, and, in a tragic reflection of the black cause that Kendrick centres on, the nameless narrator is revealed to be Aaron Burr, ‘the damn fool that shot him’. Yet, once again, the sounds fall to silence, as the voices stand alone to sing the final line: ‘Alexander Hamilton’.

No longer seeming styles and centuries apart, the performances of Hamilton and Lamar point to matters of social and political importance through a popular shared medium: the power of music. But not just any music; this is the music of struggle, of skill, and of voices usually silenced. So let’s start listening.