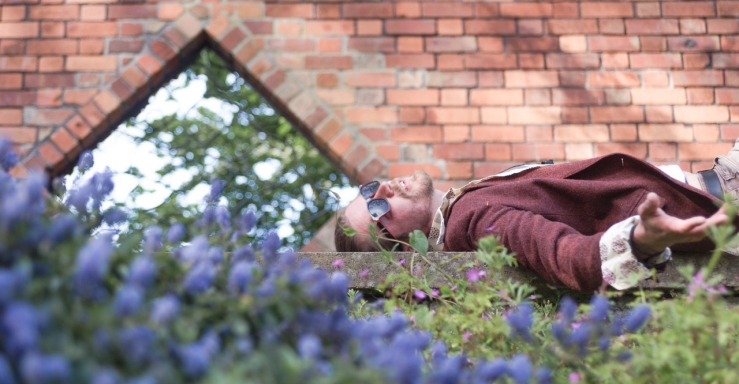 Joyous and tragic and tear-jerking and gorgeous

Shakespeare, ‘star-cross’d lovers’, ancestral strife, and… an open-air swimming pool? Insane Root Theatre’s ‘fair Verona’ is Eastville Park Swimming Pool, an empty, open-air pool just east of the city, and it’s the surprisingly perfect place to lay our scene. Rich as it is in imagery, romance, and rivalry, Insane Root’s Romeo and Juliet is joyous and tragic and tear-jerking and gorgeous, with its greatness cleverly tucked away at the edge of a green and covered by the gates of Verona.

An old amphitheatric Victorian lido, the pool is drained and derelict, thick with undergrowth, and growing ever darker in the dusk: these are organic grounds for a tragedy, but the true ground for tragedy in Romeo and Juliet is the jarring generic change that comes with Mercutio as a casualty in Act III and transforms a coarse, oftentimes juvenile comedy into the tragic ‘two hour traffic’ augured in the prologue. With canonic characterisation as a tragedy, it’s often challenging to pitch the comedic tone, but as Insane Root tease out the originality of classic plays by performing them in original, often unexpected, places, the pool is perfectly pitched to accommodate tradition and creation, comedy and tragedy, and to grow them together organically. END_OF_DOCUMENT_TOKEN_TO_BE_REPLACED

Only the interval of @WarHorseOnStage at @BristolHipp, already so visceral and evocative and moving – epitomises the magic of theatre 💫

Loved @WarHorseOnStage when I reviewed it so much… I'm seeing it again tonight with my parentals 💛🍻 review: https://t.co/pjqgqKBh4Z pic.twitter.com/1Kw6PRwxum

War Horse may be a show about horses, but it has the most heart, the most heroism, and the most humanity of any show you’ll ever see. The tale of Joey the horse and his boy, Albert, torn apart by war and wrestling to return home together, is told in a visceral, evocative, and immensely moving way with hope and humanity at its heart.

Joey is a horse half-thoroughbred, half-draft, and it’s homogenous to the ingenious design and direction of the production. Half of the experience is pure, refined, performance that feels real, in the acting, the affect, the inhuman affliction of warfare, and the other half is creativity and craft working in front of us to make thrilling, theatrical magic.  The horses are played by three puppeteers – a head, a heart, and a hind – that stamp, snort, and stand up on their hind legs like horses, but also think and feel like humans. This is war in all its brutality, but also its overwhelming bravery: the mechanisms and machines and mercilessness are all laid bare, but so are the men and their mounts.

At its heart, War Horse is a stellar example of ensemble storytelling for a supremely talented company, where hand-puppeteered horses and humans working in harmony prove there’s hope for all humanity to imagine a world that works together.

From the charm of Frederick Ashton‘s choreography, with ‘The Dream’ truly dreamy, ‘Symphonic Variations’ simply visionary, and ‘Marguerite and Armand’ emotionally arresting, to Woolf Works, where Wayne McGregor does with movement as Virginia Woolf did with words, to Christopher Wheeldon’s Alice’s Adventures in Wonderland, an eclectic spectacle of technicolor creation, to the musical suites and magical sweets of The Nutcracker.

The depth and diversity of dance on offer is a delight, and the performances are complemented by insightful interval videos and the opportunity to be privy to the most intimate moments of a dancer’s performance, from rehearsal to retirement, as for Zenaida Yanowsky after Marguerite and Armand. After her final curtain, it was beautifully poignant to see her partners from the Royal Ballet’s roster past and present, including Carlos Acosta, Jonathan Cope, and Nehemiah Kish, as well as her partner in the piece, Roberto Bolle, present her with bouquet after bouquet of flowers. A truly fitting finale to both a wonderful career and an evening of charming works.

Thanks LEAH for such a thoughtful and insightful text. Enjoy tonight! https://t.co/1A4RpxRp1e

Twenty years ago, in 1997, it was a time of Take That, Tamagotchis and British teachers celebrating in the staff room after Tony Blair and the Labour party were elected with the mantra ‘education, education, education’. Wardrobe Ensemble’s eponymous play unpacks the politics of this cultural moment with wit, warmth, and winning charm, exploring the optimism of possibility, and, in turn, the realism that cuts through the 90s nostalgia with political poignancy.

Set in a well-meaning but not-quite-comprehensive comprehensive secondary school in the immediate aftermath of the election, the Ensemble create wholly believable characters, perform a script that’s so slick and so quick that it easily elicits laughs from its wit alone, and bop along to a nostalgia-fest of 90s bangers.

In Education, Education, Education, Wardrobe Ensemble capture the politics of yesteryear with the same anxieties of our present, managing to be riotously funny and quietly reflective; as head teacher Hugh says, in light of the election the teachers must remain politically impartial in all their classes, but, ‘we did win Eurovision, so talk about that as much as you wish’. The show ends blasting the election anthem ‘Things Can Only Get Better’, and there’s hope, as for the Tamagotchi and its reset button, that they can.

It’s late. We’re walking into a snow-covered scene, carrying a rose to ‘pay our respects’, and we’re greeted by rows of radios that remind us of gravestones that we pick up and put around our necks – and just like that, in walking from one room to another, Raucous’ Ice Road has taken us back in time and into a war-torn Russia. But, this impressively immersive performance really begins in the bar beforehand. With propaganda posters plastering the walls and lights flickering in their lanterns – and after a shot of vodka (when in Russia!) – three orphans, Leah, Tati, and Zoya, move amongst us, mouthing-off in Russian, attempting to find the missing Kub. After leading us by lantern into the performance space, the story follows their survival in a volatile landscape, and just what we’ll sacrifice for warmth in the winter and refuge from war, from a flute to your fellow man.

Masters of the immersive, the emotive, and performances with a political immediacy, Raucous made use of the vast, cavernous Jacob’s Wells Baths in Bristol to tell this story of survival, and they used every inch of it: a structure of scaffolding and stepladders stretches to the ceiling, propaganda posters fall, seemingly, from the sky, there’s snow underfoot, and even the walls have a part to play.

Merry Christmas from a crypt 💫🎄 thank you @insane_root for making my parents fans of Shakespeare. An actual Christmas miracle ⭐️ pic.twitter.com/B2RuKjfCRU

‘Be not afeard. The isle is full of noises,’ a muddling, older man murmurs to us, collected in a crypt beneath a Medieval church in the centre of Bristol as cars and buses and bits of lost conversation rumble along beyond the low door closed behind us. ‘The isle was full of noises,’ he amends, and with that opening amendment in tense alone, Insane Root Theatre have respectfully but perfectly repurposed The Tempest, Shakespeare’s most philosophical, most reflective, and most indefinite play.

The man, aged and inelegant, is Prospero, but this is the usurped ‘prince of power’ without his power; this is Prospero at the end of the play, or rather, many-a-year after the revels of the play and the epilogue’s applause has ended. Alone in his library, a homely, hearth-like creation from Sarah Warren covered in drapes and decorated with books and bric-a-brac, Chris Donnelly’s Prospero is close to the end, and not just because he’s been placed in a crypt. Carved and cavernous, it’s the corporeal and acoustic setting for Prospero’s recount of what happened to him.

Insane Root Theatre’s The Tempest balances Shakespearean tradition with exceptional adaptation, and through repurposing the text, the temporality, and the tone, the cast and creatives get closer to the heart of the play than any production of The Tempest I’ve seen, and it’s all happening right beneath the heart of Bristol.

This is it: ‘The Room Where It Happens’. It’s here. ‘It‘ is Hamilton, and after a fortnight of previews, the musical chronicling the finding, founding, and fight for American freedom through the life of founding father Alexander Hamilton, it’s finally open at the Victoria Palace Theatre in London’s West End. With so much hype and hysteria, just what is it about Hamilton that makes us all want to be in ‘The Room Where It Happens’?

Telling history through rap, hip-hop, and R&B, composer Lin-Manuel Miranda makes America’s past matter through contemporary music and a cast-of-colour who play the mostly white political players of the late-18th century. With characters and songs taking their cue both from the founding fathers who wrote America into existence and the rappers and musicians who use real-life experience to write their way to respect, Hamilton fuses the present, the past, and the future – the finale asks, ‘Who Lives, Who Dies, Who Tells Your Story?’ – into a harmonious whole with a heart that beats and breaks and aches. Hamilton tells not only a political history but a private one, with the story centring on the opposing views of Hamilton and his perpetual rival, Aaron Burr (Sir): one waits for it, the other works non-stop; one stands for nothing, the other rises up; one dies, the other survives.

What Hamilton has is a humanity, a humility, that makes it inimitable. As for Alexander in his America, being in ‘The Room Where It Happens’ is to be at the heart of the revolution, to see a stage that reflects real-life voices, faces, and feelings, to find not theatrical perfection, but an unforgettable phenomenon. Let’s hope, as Hamilton says, that ‘this is not a moment, it’s a movement’. 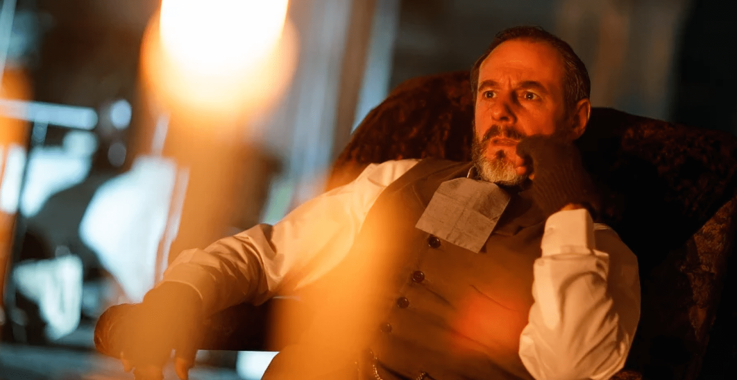 A respectfully and perfectly repurposed The Tempest

‘Be not afeard. The isle is full of noises,’ a muddling, older man murmurs to us, collected in a crypt beneath a Medieval church in the centre of Bristol as cars and buses and bits of lost conversation rumble along beyond the low door closed behind us. ‘The isle was full of noises,’ he amends, and with that opening amendment in tense alone, Insane Root Theatre have respectfully but perfectly repurposed The Tempest, Shakespeare’s most philosophical, most reflective, and most indefinite play.

The man, aged and inelegant, is Prospero, but this is the usurped ‘prince of power’ without his power; this is Prospero at the end of the play, or rather, many-a-year after the revels of the play and the epilogue’s applause has ended. Alone in his library, a homely, hearth-like creation from Sarah Warren covered in drapes and decorated with books and bric-a-brac, Chris Donnelly’s Prospero is close to the end, and not just because he’s been placed in a crypt.

The crypt, carved and cavernous, is the corporeal and acoustic setting for Prospero’s recount of what happened to him, and he recreates the characters with some well-repurposed household trinkets: END_OF_DOCUMENT_TOKEN_TO_BE_REPLACED