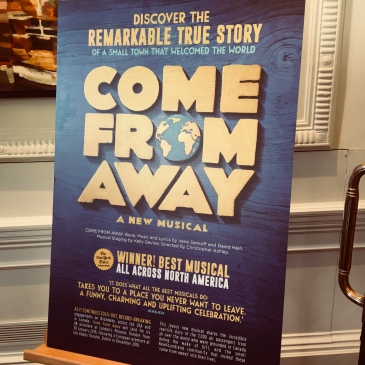 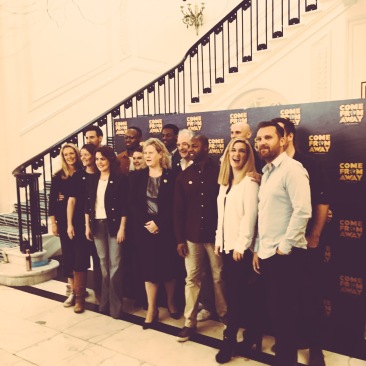 ‘We all come from away…’

We all come from away… but what can you do when the world comes to you? The Canadian islanders from Gander welcomed the strangers that were grounded on their shores in 2001 and stranded there in the week after the attack on the twin towers with warmth, wit, and a kettle that was always on. The musical Come From Away, with its focus on compassion and community, follows these funny-accented locals as they care for, clothe, and comfort these ‘come from aways’, and this touching and uplifting tale is coming in to land in the UK in early 2019.

With as warm a welcome for the cast as for the come from aways, the West End islanders performed the rousing ‘Welcome to the Rock’ to welcome us all. Introducing the islanders, their eccentricities, their accents – ‘you probably understand about a half of what we say!’ – and where they all were when they learned of the 9/11 attacks, the song opens Come From Away with a folk-rock sound.

The cast is captained by Rachel Tucker as the American pilot and pioneer for women with wings, Beverley Bass, who was flying an American aircraft from France to Fort Worth Airport when it was one of the 38 planes forced to ground in Gander. From Elphaba’s broomstick in Wicked in the West End and on Broadway to Beverley’s Boeing 777, Tucker is used to flying, and with the sublime female ensemble as her wings, her voice soars in Beverley’s solo song from the score, ‘Me and the Sky’.

With music and lyrics from Irene Sankoff and David Hein, the musical is a catharsis for anyone who feels like all hope is lost for humanity, as the Canadians willingly welcome the come from aways into their homes and their hearts, and even welcome them again ‘Ten Years Later’. In a video introduction from Seattle, where the US tour of the production is opening soon, David says ‘people around the world are hungry right now for stories about kindness, and this is a story about people coming together which is needed now more than ever before. It’s a story about the world coming to a small town, and we can’t wait to share it with the world!’

Invited to write-up for London Box Office, 10th October 2018 at Canada House; tickets for Come From Away at Phoenix Theatre from 30th January 2019