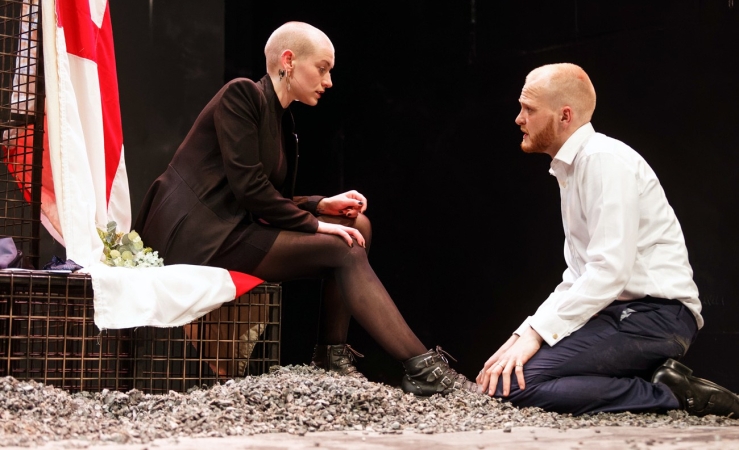 Like the English at Agincourt, Shakespeare at the Tobacco Factory aren’t unshaken, but they are victorious

Henry V, the final play in Shakespeare’s historical tetralogy, focuses on King Henry’s campaign for France, victory at Agincourt, aggressive patriotism, coming-of-age, and eventual political treaty and promise of peace with his marriage to Katharine of Valois.

From the English court to the fields of France, the performance asks a lot of our ‘imaginary forces’, even to ‘piece out [its] imperfections with [our] thoughts’, and this overt theatricality is, like King Henry’s army at Agincourt, defensive – attacking, forgiving and apologising for its faults – and defenceless in the face of a much greater force: the audience.

And, like the English at Agincourt, Shakespeare at the Tobacco Factory aren’t unshaken, but they are victorious. Elizabeth Freestone’s direction is austere, with the action playing out in a darkly industrial dystopia characterised by Lily Arnold’s greyed costumes and frayed edges, steely drama and gravel underfoot.

Past productions have found parallels in contemporary conflicts, and though the piece occasionally loses its footing on the uneven contextual ground it’s founded on, it’s confidently crafted with the aid of Matthew Graham’s lighting and Giles Thomas’s low, lingering music and freed from conforming to tradition.

Freed from concrete time, customs, and classicism, Freestone’s finest directorial decision is to conflate the Dauphin and Katharine into one intimidatingly confident character in an astounding performance from Heledd Gwynn. Bequeathed her brother’s wits, wearing a sharp suit and with a shaved head, she’s an equal for Ben Hall’s Henry, and isn’t wooed so much as overwhelmed by him with a harrowing wail.

The King’s lines come thick and fast, with Hall a frustrated and oft-fraught Henry, and, through all her poetic fluency, Joanne Howarth’s heavenly Chorus is also overwhelmed by the prosaic horror of warfare, at one point wiping her eyes with pity and contempt for the actions of humanity.

Freestone frog-marches the performance from historical fact to tragic fiction, and leaves the humour in the trenches: Katharine’s English language teaching is moved from a comic placemat for her future in England in Act III to an angry, grief-stricken lament over ‘the hand, the fingers, the nails, and the arms’ of the fallen French in Act V, proving Freestone’s originality as well as the versatility of the play’s language.

There are still some fine comic performances, with Chris Donnelly’s almost punch-drunk Pistol planting flowers in an empty gin flagon and David Osmond fantastic as the fast-talking Welsh captain Fluellen. Henry V, with its brutal history and beautiful poetry, is a battlefield, but this ‘band of brothers’ at the Tobacco Factory are performing it bravely.