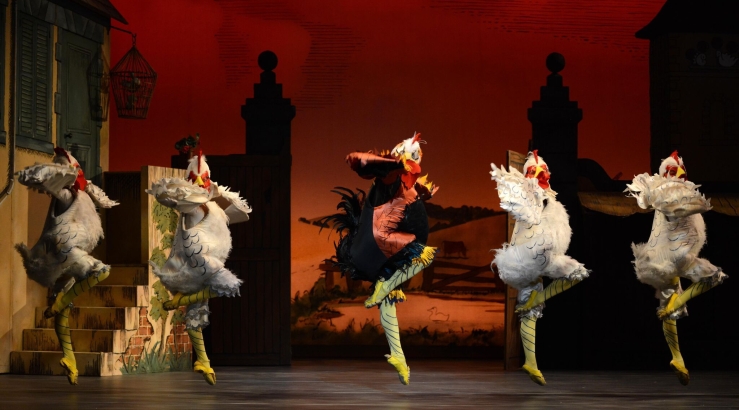 La Fille mal gardée is classical choreographer Frederick Ashton at his most charming: comic, characterful, and with English classicism at its finest, it’s a playful romp through a pastoral picture of an unruly fille’s attempts to outfox her interfering mother to marry her charismatic but impoverished love. Balancing Ashton’s charming choreography with bright characterisation and breezy ballon, Birmingham Royal Ballet are absolutely beaming in this brightest of ballets.

With maypole dancing, a pony, and a pantomime dame, it’s a deceptively simple premise, but La Fille demands the same meticulous footwork, expressive épaulement, and effortless performance as any Ashton classic. The choreography is characterful – with a clog dance for the dame, a coop of dancing chickens – accompanied by some percussive clucking from the orchestra pit – and a very English gallop around the maypole – as well as intricate and vigorous, full of grand allegro leaps, lifts, and gallant pas de deux.

The pas de deux for lively Lise and her country lover Colas are just as playful as the pair themselves. A consummate comic couple, Céline Gittens’s grace and grit are matched by Tyrone Singleton’s gorgeous gallantry, with their timing, extensions, and teasing intimacy growing excitedly together across the acts. The coquettish tricks that tie the lovers up in a bow in the pas de ruban of Act I blossom into a bouquet of ribbons, balances, and the triumphant ‘bum-lift’ – with Lise perched aloft on Colas’s palm – in Act II. Ribbons weave their way throughout, and, in the celebratory pas de deux in Act III, they even adorn Lise’s white wedding dress as a symbol not only of the love between Lise and her beloved, but of the love woven into the very fabric of the ballet.

As Lise’s mother Widow Simone, Rory Mackay is a formidable pantomime dame with no time for her daughter’s independence, preferring to drive her towards the outstretched palm – and open purse – of a rich man’s son, with James Barton just joyous as the brilliantly off-balance, umbrella-wielding Alain. No-nonsense and not afraid to put her fearless fille over her knee, Mackay’s Widow is wonderfully droll, her relationship with Gittens delightful and its influence evident in her daughter’s daydreams of married life, as Lise mimes putting one of her imagined mischief-makers over her own knee. La Fille is, after all, a reflection on familial relationships as much as romantic ones, and it’s the less-danced moments – like Lise’s daydream, but there are a myriad more all around – that are the most human, heartfelt, and, often, humorous.

With its neat narrative knots and youthful innocence, La Fille is twee, but its escapist, enchanting charm is timeless.