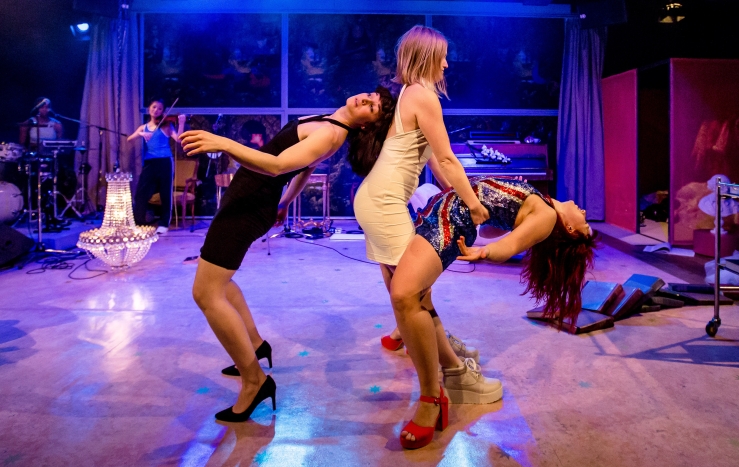 Electrifying and confronting a classic with an unforgiving ‘fuck you’

RashDash’s Three Sisters, after Chekhov is thrillingly irreverent: to rules, to theatrical form, and even to reviews, but it’s their irreverence that’s so deserving of reverence. A rocking and rollicking retelling of a Russian classic with no time for men, marriages, or monologues, it tears up tradition and tramples all over it.

‘Rash as in reckless, Dash as in fast’, RashDash’s Three Sisters lives up to the trio’s self-titled expectations and destroys all others: dancing, dreaming, and cheerleading through the drawing rooms of Chekhov’s domestic drama, a chaise and a chandelier are the only evidence that these ladies were once in Chekhov’s Russia. The Russian Revolution that threatened and eventually overthrew the classist autocracy is reimagined as a revolution against the virility of the classical canon.

Chekhov makes a cameo or two, but he’s as archaic, as unchanging, and as characterless as his bespectacled sculpture until his bust is (literally) suckling at the breast of those brave and brash enough to challenge him. Three Sisters electrifies – with a rocking live score performed by the three sisters, percussionist Chloe Rianna and virtuosic violinist Yoon-ji Kim and electric lighting from Ziggy Jacobs – and confronts a classic with a great, fat, unforgiving ‘fuck you’.

There are reflections of the play’s themes and motifs – the occasional period costumes of the upper class, the electronic ticker-tape “tick-tocking” like a clock, the iconic turning-top – but, as the caveat to the title implies, they are reimagined in a time very much ‘after Chekhov’. The sisters are unclothed as often as they are corseted, shout as often as they shut up, and ditch decorum in favour of fighting and dancing, all underscored by visual and vocal allusions to contemporaneous female cultural phenomena. From Baby Spice to Britney Spears, their wit spares no one.

More physical in its images and freer in its form, the contemporary action is punctuated with imagined moments of canonic clout: the weight of the work is viscerally envisioned as tomes piled with aplomb upon Masha, reviews of past performances are recited and then rapped over pumping rhythms, and, of course, the torso of Chekhov is tossed around with token recklessness.

As three white women, it’s inevitable that this appeals to a particular form of feminism, but if you find yourself in that demographic there’s something freeing and powerful about the performance. Helen Gaolen’s Olga is the grating philosophiser, Abbi Greenland’s Masha the straight-talking singleton, and Becky Wilkie’s piano-playing Irena the unsophisticated sister waiting for a turn in the spotlight. And it’s what not only Irina, but all women in male-dominated spaces do with that turn, that time in the limelight, that the play is provoking: as Irena sings, “it’s your space, now all you’ve got to do is fill it”.

And Three Sisters, after Chekhov is full: of music, of mischief, of imagination, and with a giant middle finger to the men who forced us out. Rest assured, RashDash are forcing their way in.