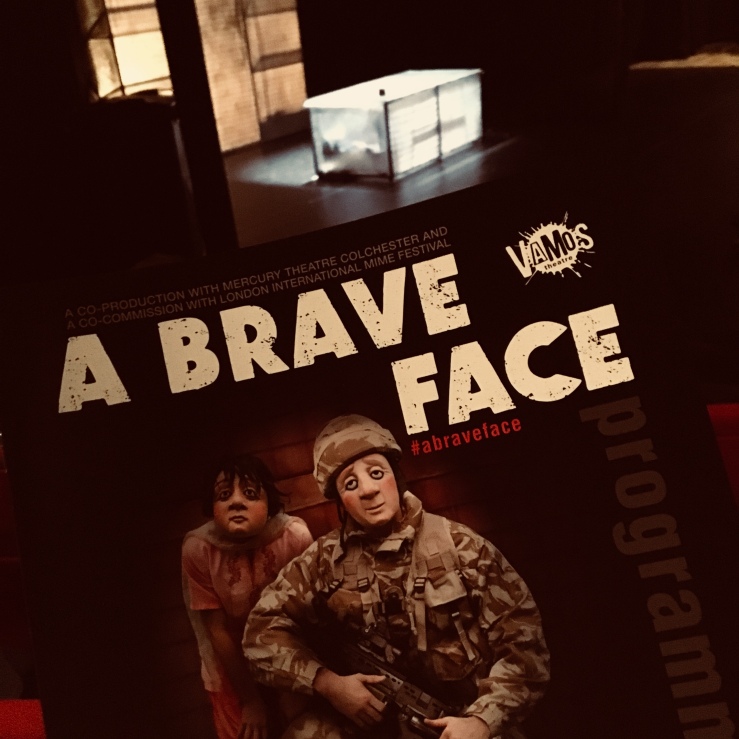 Bravely unmasks the effects of battle with verity and verve; valuable, beautiful viewing

‘His hardest battle is the one back home’: far from the battlefield, free from bullets and bombs, and back with family and friends, the fight is over – or is it? Vamos Theatre’s A Brave Face faces the fear and effects other than physical felt by veterans in the aftermath of the UK’s involvement in the Afghan conflict; a fight, like the aftereffects of war on the armed forces, with no conclusion and no victor.

Words feel worthless in the face of war: it’s a physical, visceral thing, and Vamos voice that with masks, movement, mime, and music, and they voice it mutely. Voicelessly, the plot follows a young man, Ryan, posted to Afghanistan, and sees him lose more than a mate to the fighting, as he returns from the field with Post Traumatic Stress. The themes are heavy, but Vamos reveal them with heart and humour: Sean Kempton’s stereotypically pumped-up macho-man parades his press-ups as an intimidation tactic, Ryan and his comrade-in-arms Ravi – a playful and perfectly panicky Rayo Patel – make much mischief, and there’s a performance as unexpected and meticulously executed as any military operation. Yet, heart-shattering moments haunt the humour, as Ryan lashes out at his beloved sister and his loving mother, Angela Laverick, is shocked to see her son shaking in a wheelie bin.

Though emotionally motionless, the movement and music around the masks make them move: just as Ryan’s unmoving face morphs from tired teenager to vacant veteran, Joanna Holden changes face to perform two charming children, Katie and Khatera, who echo each other even though they’re so far apart. The masks are a metaphor for performance, masking thoughts and feelings with a brave face, and it’s a metaphor that’s amplified when the masks are removed for the bows. As we appreciate the performers, James Greaves, as Ryan, is the last to be revealed, and isn’t the really young man expected from his character and fantastically physical performance, proving, as in the piece itself, that expression masks so much.

Without voices, some of the movements are overlong, and in the intimacies of the Tobacco Factory, moments of verisimilitude are lost as we’re so close to the backcloths and blackouts. Yet, Vamos are able to draw a battlefield without violence, only with blackouts and drumbeats, and describe a bittersweet tale without voice. A Brave Face bravely unmasks the effects of battle with verity and verve; valuable, beautiful viewing for all.