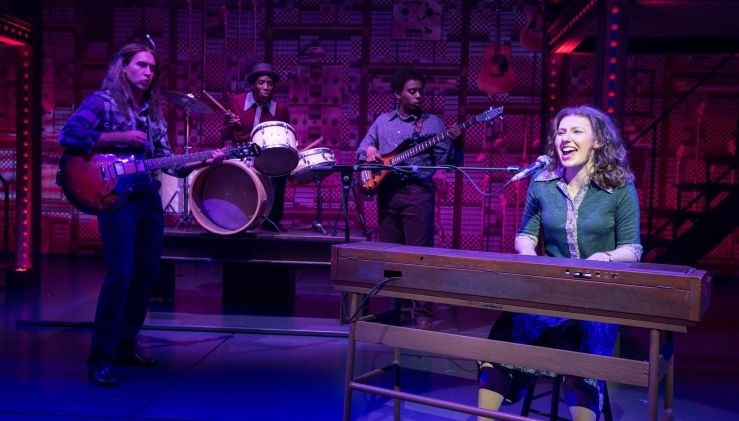 Beautiful is a jukebox biomusical: from Brooklyn to 1650 Broadway to Billboard, it charts the charming Carole King’s musical, and romantic, relationships and eventual meteoric rise to fame after finally finding her voice.

The musical is less about King’s life than it is her music and lyrics, but so rich and so resonant are their sound that it’s a moving and lively listen in its own right. This tuneful Tapestry is complimented by a plot that revolves mostly around her creatively fruitful but romantically fruitless relationship with lyricist Gerry Goffin, although, as the tattered piano at the centre of the free-roving set proves, this is more about the music than its makers.

Structurally, Act I acts like a ‘studio to stage’ recreation of King and Goffin’s greatest hits, with ‘Some Kind of Wonderful’ and ‘Will You Love Me Tomorrow’ taken from Carole’s characteristically genuine keys and given to musical giants like the Drifters – expertly captured by Khalid Daley, Simeon Montague, Matthew Elliot-Campbell, and Matt Mills – and the Shirelles. Hearing Carole’s heartfelt compositions first played at the piano transform into hearty performances that pay homage to the sound of the sixties is not always harmonious, but in Act II, once it’s Carole’s sound at the centre, the effect is symphonic. Her farewell to friends and fellow songwriters Cynthia Weil and Barry Mann – also lovers, these musical marriages were fertile for love and well as lyrics – is an affecting performance of ‘You’ve Got a Friend’, and the song ‘You Make Me Feel Like a Natural Woman’, though written with Gerry and worried for what it might make her feel many years later, is infinitely powerful when sung solo in the studio.

As Carole, Bronté Barbé is adorably dorky and endlessly endearing, wonderfully capturing King’s distinct voice without detracting from an accomplished musical and dramatic performance. The framing device, with Carole at Carnegie Hall, is a clever way to feel like one of her adoring fans, and come her performance of ‘Beautiful’ at the end, if you weren’t a fan before, you will be when you leave. Kane Oliver Parry is a contemplative but volatile Gerry, although Beautiful’s book does little to really develop the relationship between him and Bronté’s Carole; that development seems to be bestowed upon their rivals, with Amy Ellen Richardson and Matthew Gonsalves both charming and comedic as Cynthia and Barry, as well as delivering top-drawer vocal performances.

The Carole King Musical is Beautiful: the songs are achingly affecting, the acting is charming, and the visuals are vibrant and evocative, but, as King’s solo music evidences, her vocals and the ivories are where the real beauty is.