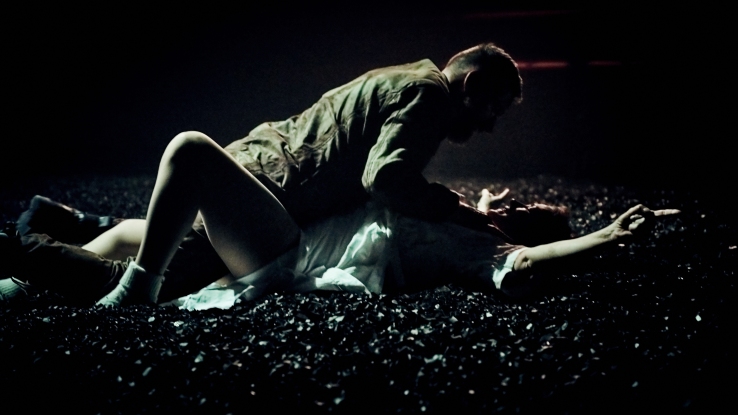 Macbeth at the Tobacco Factory opens as one of Emily Dickinson’s famous works, about a fly interposing indifferently as death falls on its speaker, ends: ‘with Blue – uncertain – stumbling Buzz –’: the lighting is stark cyan, the space dark, and the electronic soundscape buzzes and breathes around us. Yet, a fly-like buzzing as one dies is not the only similarity between the atmosphere summoned by Dickinson’s unadorned words and Adele Thomas’s austere direction of Shakespeare’s death-drenched work.

Although it’s a dagger, not a fly, that the murderous Macbeth sees before him, he and his driven-mad wife, like the words of Dickinson’s dying, ‘could not see to see’: that is, as is later observed of the Lady herself, their ‘eyes are open’, ‘but their sense is shut’. Fuelled – or fooled – by the three weird sisters’ prophecy that sovereignty shall be his, the thane is blinded by ambition and soon has blood on his hands. Yet, in Thomas’s hands, it’s the ‘hags’ that are blind: barefoot, dressed in virginal white and with their eyes veiled, they talk in a foreign tongue but see more sense than most, and, as the action bloodies, the disbelieving voice of truth, Banquo – a brave and benevolent Aaron Anthony – is blinded in death to haunt Macbeth.

This is an innovative vision of the Scottish play, and it doesn’t always play by the rules. The witches lose their poetry and much of their power in the Gaelic language, although the attempt to unfamiliarise them is a thought-provoking one. And, though the blood is used liberally, so is an unambiguous bleakness: in the text, Macbeth overturns the law of the land that dies with Duncan and is restored with Malcolm, but the resolution here, in a witches’ ritual, is ripe with the implication that the past may repeat itself; here, chaos is king.

Performances from the Factory Company are exceptional across the play. Jonathan McGuiness and Katy Stephens are passionate lovers as well as fighters: McGuiness’s violence has a frightening virility, though his asides, lit with stark simplicity, have an unexpected sensitivity, and Stephens, in an astounding, assaulting display of undeniable determination that ultimately destroys her, delivers the damning line ‘leave all the rest to me’ astride him, unsexing him there and then. Elsewhere, Joseph Tweedale’s Macduff’s laugh in the face of prophecy is topped with his triumphant spitting out of the revelatory line ‘from his mother’s womb untimely ripped’, Cait Davis produces some drama – with the aid of a devil’s deafening knock on the door – as the drunk Porter, and Jack Riddiford’s Malcolm has a refreshingly realistic immaturity for the young man forced to flee in the aftermath of his father’s murder. In this Macbeth, something buzzing, bloody and bleak, as well wicked, this way comes.