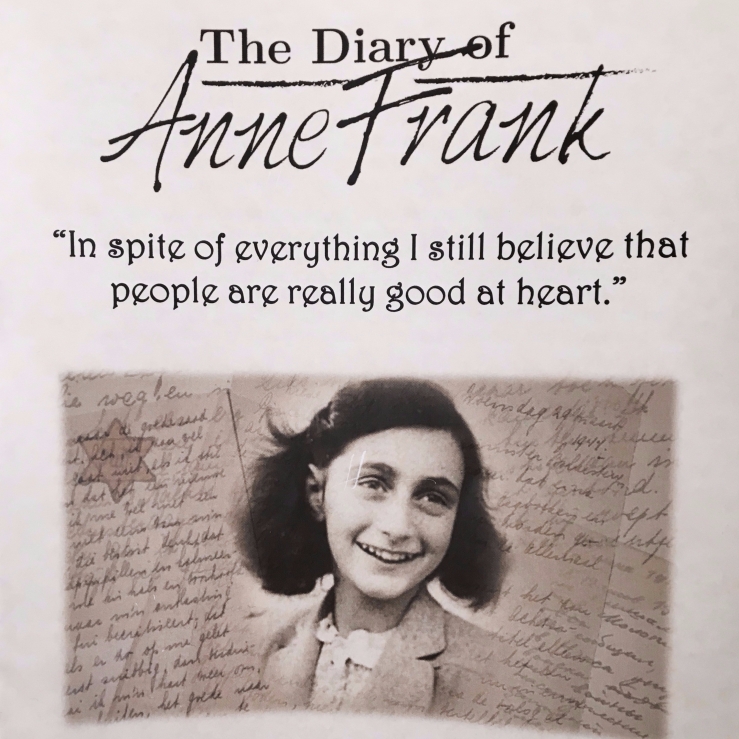 The Holocaust is a haunting, catastrophic tragedy in human history, but the quiet, intimate details of it are hidden ones: behind a bookcase, or documented between the pages of a posthumously published Diary of a Young Girl. Anne Frank is an infamous victim, but while living in the annex of her father’s Amsterdam offices for two years with another Jewish family and a dentist, she was also just a young girl; growing up, outgrowing the 500 sq. ft. she and eight others had to dwell in, and writing voraciously in her diary. Using Frances Goodrich and Albert Hackett’s 1950s adaptation of the diary, this production puts Anne’s wistful, wondering, and endlessly witty writing centre stage.

The action charts the Franks, van Daans and Mr Dussel the dentist from their arrival in the annex to the anonymous nod that forced them to their deaths in the concentration camps, with the actors onstage only interspersed by appearances from two of their protectors. The effect is claustrophobic, and in the Alma Tavern’s closed performance space, it’s the perfect place for the intimacies of their relationships to play out. The performance unfolds in a series of scenes fused together by Anne’s voiceover, which works well to portray her introspectiveness without the need for unnatural monologues, and splits an otherwise sprawling play neatly into parts.

In the last letters of her diary, Anne describes herself as a ‘bundle of contradictions’, and Lottie Elcoate’s bright and brilliantly deft rendering of the young diarist is just that: she’s curious but occasionally conceited, talkative but contemplative, undoubtedly annoying but innocently endearing; bold enough to begin the celebratory singing but bashful when growing near to Peter, the only boy her age in the annex. The relationship between her and Craig Weaver as her benevolent father, Otto Frank – who, as the only one to survive the war, frames the performance by finding his daughter’s diary amidst the papers saved by one of their protectors, Miep – is beautifully realised in their waltzes and warm embraces. The intimacy of one moment in Act I finds a charming – and moving – echo later in Act II, as Anne finds comfort after a nightmare in resting her head on her father’s lap, and later, wanting to comfort Peter – a nervous but pensive depiction of adolescence from George Dix – she imitates the act by placing his head on her own lap. Although this time the connotations, like the maturing Anne, have very much changed.

In the annex, Anne’s relationships blossom and break under the foreboding weight of the war: she elbows Peter to the brink of embarrassment – and the bed – in her attempts to befriend him, but that friendship will be forced to wither. This performance is most affecting in its moments of happiness – as this is history, and their fate is already held in museums and mass graves, its effect is haunting – and the Hanukkah scene is a particular highlight. Anne’s gifts are poignant reflections on her relationships: a place for all her sister Margot’s ‘cross words’ in a crossword puzzle, a promise to do as she’s told for ten whole hours for her mother, a scarf made of scraps for her father, a razor in recognition of Peter’s maturation – and growing moustache – and for Mr Dussel, (a wonderfully dramatic Martin Whatley), her unwilling roommate, a pair of ear plugs for some peace.

Peace and privacy are an impossibility, with a busy set and eight actors onstage in such a small performance space, but with such a visceral and human story, there’s room for something more. Ascending the staircase to the Alma Tavern Theatre, as narrow and enclosed as it is, captures the claustrophobia, if only physically, of Anne’s ascension to the annex, and in these intimate theatres there’s an opportunity to create a truly immersive performance. The aim of telling historical stories must be to humanise them, and to immerse us in them is to force us to confront history, if only, as Anne was in her writing, we are confident enough to imagine a world outside our confines.