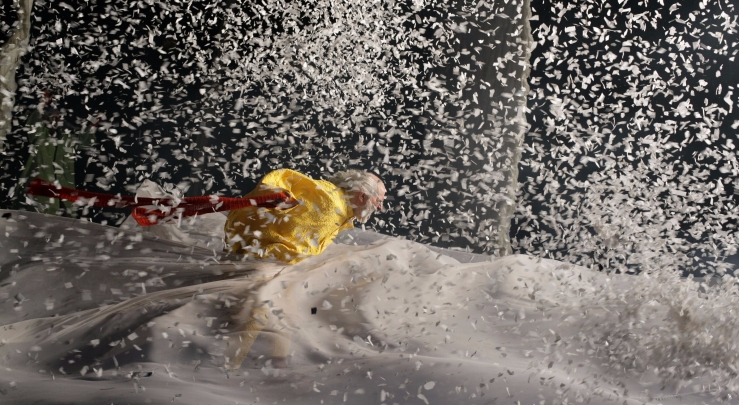 A show in the spectacular superlative: comedy touched with melancholic charm

Clowning belongs in the circus: beneath the big top, behind a big, red nose and between comics, not accomplished actors… yet Slava Polunin and his Snow Show are unequivocally proving that clowns really belong on the bright lights and beauty of the stage in his breath-taking blizzard of a performance.

Slava’s Snow Show is a show in the spectacular superlative: the brightest lights, the boldest ambition, and the biggest, ahem, bouncing balls. And yet, from the most outlandish and loudest laughs come the quietest moments of comedy touched with melancholic charm. Late in Act II, Slava slips his hand into a hanging coat sleeve and caresses his own cheek in a scene that quiets the laughter and captures the imagination and the empathy of an audience immersed in the magic. There is no story as such, but a thread of longing and loneliness weaves the show together and uses laughs to fill any spaces. The scenes land somewhere between a skit and a lament, a skilful balancing of the spectacular and the silently stirring, and to accomplish it all only with mime and some well-known music – from the ambient ‘La petite fille de la mer’ to the magnificent ‘O Fortuna’ finale – is an immense theatrical achievement.

Slava himself is a master of movement, each placement and expression measured and meticulous and inexplicably effortless. From his face to his fingertips to his fluffy-looking feet, Slava’s performance emanates with ease, and although a forlorn-looking fellow, it feels like he holds out the hand of friendship to the whole theatre, and whether young or old, you reach for it readily and willingly. The mastermind behind the whole creation, Slava makes the most of any moment, from the most impressive to the improvised. When a cough interrupts his slow shuffling offstage, he turns around to fix the culprit with a frown, and a well-timed, imaginary watch-check follows a couple who leave their front row seats early – and if they didn’t return, it’s their loss, as the snow-filled finale is a moment of theatrical magic not to be missed.

A clowning chorus in green frock coats, ski-length shoes and horizontal hats that compel them to tilt their heads just to pass each other follow in Slava’s footsteps – at times, quite literally – and are the mischief-makers to his theatrical architect. And, after all the fun is over, you’ll leave not only with a handful of snow but a heart full of warmth, too.