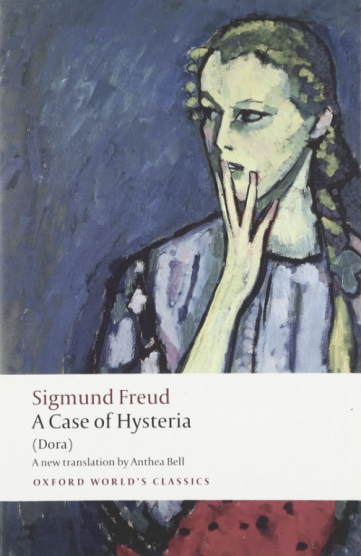 ‘I thought how unpleasant it is to be locked out; and I thought how it is worse perhaps to be locked in […]’[1] muses Virginia Woolf in A Room of One’s Own; an anxiety of space that arises amidst its advocacy for ‘a woman [to] have money and a room of her own if she is to write fiction’[2]. Although neither are writers of fiction, the women protagonists of two texts, Sigmund Freud’s Dora: An Analysis of a Case of Hysteria and Charlotte Perkins Gilman’s The Yellow Wallpaper, are subject to Woolf’s spatial anxiety. Both are locked in and out of literal and metaphorical feminine spaces, acknowledged by feminist critics Gilbert and Gubar as ‘parallel confinements in texts, houses and […] female bodies’[3]. This study will analyse how in their texts – Freud’s a ‘case history’[4] of ‘petite hystérie’ (Freud, p.19) for ‘publication in a strictly scientific medical journal’ (Freud, p.4), Gilman’s a first-person fictional account of a woman’s experience of ‘a slight hysterical tendency’[5] – the writers’ portrayal of these spaces infers the locking in and out of their protagonists. Finally, this study aims to determine, as Woolf wonders, which is ‘worse’: to be locked in, or locked out?

One begins with the spatial settings of the texts, the ‘houses’ of Gilbert and Gubar’s ‘parallel confinements’. As a New England ‘colonial mansion’ (Gilman, p.1), The Yellow Wallpaper’s setting is subject to Anne Aronson’s theory that the way in which ‘space is gendered’[6] can be ‘amply demonstrated in the history of American architecture. Victorian homes […] were built with special rooms and spaces for each gender […] male space was private, a retreat from the family; female space was open to human traffic’[7]. Gilman subverts these Victorian spatial norms; the narrator’s yellow-wallpapered room ‘at the top of the house’ (Gilman, p.5) and not only private but prison-like. Outside, the house is surrounded by restrictive ‘hedges and walls and gates that lock’ (Gilman, p.3), reflected within by the ‘heavy bedstead, and then the barred windows, and then that gate at the head of the stairs’ (Gilman, p.7). Additionally, the bars are not just confined to the windows, but erected in the ‘pointless pattern’ (Gilman, p.13) of the wallpaper as ‘the bloated curves […] of ‘debased Romanesque’ delirium tremens’ (Gilman, p.13) become ‘bars!’ (Gilman, p.20).

In light of Gilman’s subversion of gendered space, Snyder-Rheingold interprets the ‘atrocious nursery’ (Gilman, p.6) as a ‘perverse permutation’ of John’s ‘private stud[y] where [his] scientific practice is a close study of his wife’[8]. Whilst only the wallpaper seems to ‘provoke study’ (Gilman, p.5), the narrator merely ‘direct[ed]’ and ‘prescri[bed]’ (Gilman, p.4), one agrees that John commands the space as he does his wife. John’s asserts his authority by ‘shut[ing] the window’ (Gilman, p.4), enforcing both privacy and confinement.

Yet, Herr K.’s spatial authority extends to Dora’s own space. Dora’s action, to ‘lock [her]self in’ (Freud, p.56) her ‘bedroom’ (Freud, p.56), is as much to lock Herr K. out, for ‘fear of being surprised […] while I was getting dressed’ (Freud, p.56), as it is to lock herself in, but Herr K. violates that privacy by ‘remov[ing]’ the ‘key’ (Freud, p.56). This transforms Dora’s space into the typically gendered female space of Aronson’s theory, now open to human traffic. Furthermore, Snyder-Rheingold’s notion of space in The Yellow Wallpaper as somewhere ‘access is restricted except to the privileged–the one who possesses the key’[9], can be equally applied here, and, coupled with Dora’s anxiety over being ‘surprised by Herr K.’ (Freud, p.56) in a state of undress and the phallocentricity of Freud’s sexually suggestive ‘we also know what key will open her’ (Freud, p.56) in the footnote, there is an implication that the room is not the only female space open to human traffic, so too is the next of Gilbert and Gubar’s spaces, ‘female bodies’.

Beyond the patriarchal privilege of Herr K., exemplified by the ‘embrace [where] she felt not only the kiss on her lips, but also [his] erect penis pressing against her body’ (Freud, p.24), both John and Freud use their doctor’s authority as their ‘key’ to the female mind and body. As Freud reasons, ‘in the same circumstances a gynaecologist can get [women] to expose all parts of their bodies to them’ (Freud, p.40), however, whilst one doctor uses their key – their privilege and circumstances – to lock their subject in, the other locks theirs out.

Similarly barring Dora from recovery by analysing her psychological space to a masculine standard of sexuality, Freud’s footnotes are full of phallocentric inferences: he deduces that ‘the disgust that Dora felt at this kiss cannot have been the result of accidental causes’ (Freud, p.23) because Herr K. was a ‘youthful man of attractive appearance’ (Freud, p.23), and terming Dora’s ‘homosexual […] love for Frau K.’ (Freud, p.103) as ‘gynaecophile love’ (Freud, p.103), a ‘male […] emotion’ (Freud, p.53). And yet, Freud’s treatment of his female subject excludes rather than encloses.

Unlike John, who insists his wife’s hysteria is something ‘no one but [herself] can help [her] out of’ (Gilman, p.15), Freud’s analysis alienates Dora from her own body and psyche. Freud’s ‘interpretation of dreams’ (Freud, p.6) not only reduces Dora’s body to ‘symbolic sexual geography’ (Freud, p.85), her genitalia a ‘genital atrium’ (Freud, p.85), with its architectural connotations, and her pubic hair a ‘dense forest’ (Freud, p.85), but treats her psyche as a relic to be exhumed. His ‘analytical findings’ (Freud, p.8) are the ‘unearth[ed] invaluable if mutilated remains from antiquity’ (Freud, p.8), with ‘antiquity’ forcing Dora’s alienation from understanding apart not only spatially, but temporally. Furthermore, many critics note the implications of ‘mutilated’, with Reilly and Moi identifying the ‘sexual organs […] in Freud’s notorious conception [as] another site of ‘mutilation’’[11] and as ‘his usual way of describing the effect of castration’[12]. Thus, there exists a parallelism between the space on the female body where the phallus is missing, and the ‘gaps in the memory’ (Freud, p.13) that must be ‘fill[ed]’ (Freud, p.72) for Dora to recover. To echo Snyder-Rheingold again, ‘access is restricted except to the […] one who possesses the key’[13]: Freud. Only he has, as Moi deems, ‘what is missing’[14], the phallocentric ‘key’ (Freud, p.83), the ‘male counterpart to […] the box’ (Freud, p.83) that he asserts are ‘the genitals’ (Freud, p.83), and the metaphorical key to understanding that his profession authorises.

In The Yellow Wallpaper, the reverse is true of female bodily space. Firstly, the antithesis to Dora’s alienation from her body is the narrator ‘emerg[ing] as her own confinement’, as Snyder-Rheingold argues, ‘act[ing] out her very interiority’[15] as she is the woman in the wallpaper ‘shak[ing] the pattern, just as if she wanted to get out’ (Gilman, p.17). Her ‘interiority’ seeps out, papering the external space with her psychological space, as the ‘uncertain curves […] suddenly commit suicide’ (Gilman, p.5) and ‘the pattern lolls like a broken neck’ (Gilman, p.9). This illustrates the desperate desire for freedom, as Gilbert and Gubar summarise, a ‘project[ion of] her own passion for escape into its otherwise incomprehensible hieroglyphics’[16].

Secondly, the narrator possesses her own ‘key’ and ‘lock[s] the door’ (Gilman, p.29), and, unlike Herr K., John is invited in as he is the one made privy to its whereabouts, ‘the key is down by the front steps’ (Gilman, p.32). In this way, the narrator reclaims her spatial authority, and is liberated from John’s embraces as she ‘creep[s] over’ (Gilman, p.32) his body. This is in absolute opposition to Dora, whose key to liberation, despite ‘cut[ting] short’ (Freud, p.7) the treatment, is Freud alone. Dora may be ‘denying [him] the satisfaction of liberating her […] from her disorder’ (Freud, p.105), but that satisfaction is all Freud’s.

The degree of authority Gilman’s narrator and Dora have over their setting and bodily space leads one to a consideration of Gilbert and Gubar’s final space: the ‘text’ itself. Whilst The Yellow Wallpaper is a fictional, first person narrative, one would agree with the critical opinion that it ‘can be read as a case history’[17]; a chronicling, contextualised by the pointed reference to ‘Weir Mitchell’ (Gilman, p.12), of the exacerbating effect of the rest cure. However, unlike Freud’s ‘case history’ (Freud, p.4), the narrator’s account in The Yellow Wallpaper is from the pen of the patient, not the psychiatrist. The narrator may be ‘forbidden to ‘work’’ (Gilman, p.2), yet she does. Knowing not ‘why [she] should write this’ (Gilman, p.14), only that she ‘must’ (Gilman, p.14), the narrator writes ‘in spite’ (Gilman, p.2) of John’s ‘opposition’ (Gilman, p.2) in an act of closeted defiance against her captor. Styled by critics as a ‘journal’[18] or ‘diary’[19], the very existence of ‘this’ (Gilman, p.14), a private textual space authored by the imprisoned patient, is a triumph of her entrapment.

Dora is also triumphant: the treatment is ‘cut short by the patient’s own wish’ (Freud, p.7), thereby shaping Freud’s text by leaving him with ‘only a fragment of an analysis’ (Freud, p.7). Additionally, Dora’s authority can be glimpsed in her growing awareness of Freud’s psychoanalytical technique; ‘I knew you were going to say that’ (Freud, p.59), and her reversal of the patient-psychologist power play. Dora’s enquiry, ‘then why didn’t I tell my parents at once?’ (Freud, p.91), is an imitation of Freud’s syntax, ‘then why didn’t she leave at once?’ (Freud, p.90), that could be both mockery and emulation. And yet, Dora is entirely excluded from the textual space. It is Freud who creates the character ‘whom I shall call Dora’ (Freud, p.16), and thus it is Freud who has complete authorial control. Freud’s command of the text is evidenced in his use of space on the page: the admission of his ‘technical mistake’ (Freud, p.103), the ‘fail[ure] to guess in good time that [Dora’s] homosexual […] love for Frau K. was the strongest unconscious current in the life of her mind’ (Freud, p.103), is buried in a footnote in the ‘Afterword’, isolated from the analysis. Therefore, while Dora’s defiance shapes the text’s structure, one agrees with Moi that Freud is ‘the master of the writing of Dora [… and] it is a victorious Freud who publishes it’[20], and, in turn, publicises the private female psyche. Freud’s textual mastery is exemplified by his ironic assertion that Dora’s ‘attraction towards her own sex’ (Freud, p.50) is something he ‘certainly would not devote space if I were a writer […] instead of […] a doctor’ (Freud, p.50), as ‘an author would certainly use his prerogative of censorship’ by ‘ignoring what seems extraneous’ (Freud, p.50). Yet Freud does use his ‘prerogative’, his privilege, of authorship by interring homosexuality in the footnotes, perhaps because it is extraneous to his psychosexual theory.

To conclude, as an analysis of Gilbert and Gubar’s triad of spaces – ‘texts, houses and […] female bodies’[21] – reveals, the key to authorial control can only be possessed by women who are enclosed, not excluded. Although hardly composed in the room of one’s own that Woolf envisioned, Gilman’s narrative voice is a triumph, and thus, finally, perhaps the reverse of Woolf’s anxiety is true: how unpleasant it is to be locked in, and how it is worse perhaps to be locked out.