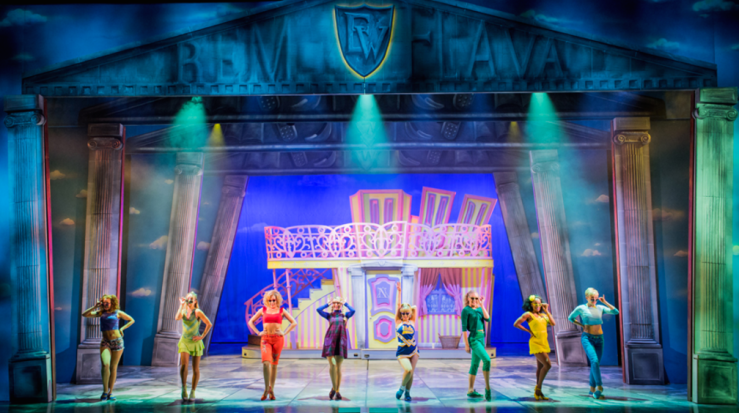 Great fun with a heart of gold under all that hair

Do blondes have more fun? Legally Blonde the Musical certainly does, but so will you, if you’re blonde, brunette, auburn, or somewhere in-between. Based on the feel-good film about Elle Woods, a fashion-forward sorority sister who heads off to Harvard Law to find her ex-boyfriend and ends up finding herself, the musical is just as fast-paced and fun-loving, but also, just like Elle, has a heart of gold under all that hair.

Nell Benjamin & Laurence O’Keefe’s songs capture all the best bits from the movie and make them ‘So Much Better!’ ‘So Much Better’, sung when Elle sees that accomplishment can outweigh attraction, is as bold and ambitious as an Act I closer should be, the courtroom drama in Professor Callahan’s case descends into criminally-entertaining chaos when the defense can’t decide if the key witness is ‘Gay or European’, and, of course, the iconic ‘Bend and Snap’ – it ‘works every time!’ Anthony Williams’ choreography is flashy and fun and performed with the force of a thousand cheerleaders by a company whose flexibility is equaled only by their enthusiasm. With so much enthusiasm on all sides, some elements seem a little gimmicky rather than genuine, but any grievances evaporate within a few songs as the feel-good fun kicks in – and the feeling couldn’t be more genuine. Any glitches thereafter are technical, as transitions between the candy-coloured sets could be smoother and the malfunctioning smoke-machine could be scrapped altogether.

As the ambitious, amusing, amiable Elle Woods, Lucie Jones isn’t a triple threat, but she is a stellar singer and a believable blonde bubbling with warmth and wit. Her relationship with David Barrett’s earnest and exceptionally-sung Emmett Forrest, an affable foil to Liam Doyle’s affluent and arrogant Warner, grows as organically as their surnames suggest and at times is truly touching: ‘what about love?’ asks Emmett in an attempt to get Elle to stay as she’s about to go home to LA, an echo of Elle’s own motivation to come to Harvard. ‘The timing’s bad, I know’ he adds, sung with heartfelt honesty to Elle instead of as an empty aside. Bill Ward’s Professor Callahan is sharp but a real shark in the water, a commanding presence that vacillates between charming and threatening, but the real revelation is Rita Simons’ ballsy, brassy, Bostonian bestie to Elle, Paulette Bonafonté.

The company are alive-and-kicking with quick choreography, quirky characters, and a couple of stand-out stars: Helen Petrovna’s fitness queen Brooke takes on the newly complicated kicking and skipping choreography in ‘Whipped into Shape’ like a real workout professional, Laura Harrison, as Elle’s enemy-turned-ally Vivienne, nails the unbelievable belt at the end of the ‘Legally Blonde Remix’, and Rachel Grundy’s cheerleading Serena is the strongest in a sorority of screaming sisters who change into a Greek Chorus to support their struggling president. And, of course, this wouldn’t be Legally Blonde without a couple of canine co-stars, and both are as cute-as-a-button, even if suffering from stage fright. There may be gimmicks but you’re guaranteed a great time – and there’s even a megamix to make sure of it!